In recent years, we have witnessed a revolution in the tech industry. Artificial Intelligence and Virtual Reality have become the norm and have successfully taken over the tech world. One of the most significant new concepts we have conceived is the evolution of blockchain technology. This technology has become a constant threat to traditional cash in the world of commerce from its very conception. 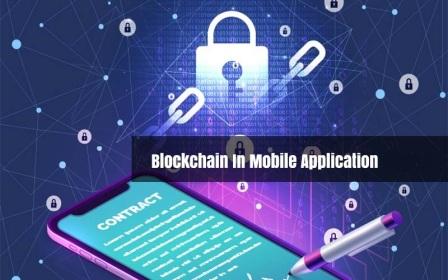 The initial goal of creating this technology was to help facilitate cryptocurrency. However, many people around the world have seen that its benefits are far wider this single objective.

Before we talk about the benefits of blockchain technology in mobile applications; let’s take a quick look at this technology actually is.

A Quick Look at the Blockchain Technology

Blockchain behaves like a traditional ledger system. It stores the transaction data for several online users on a network in an online record — commonly referred to as a “block”. This technology is not regulated by any financial institution or government. Hence, its decentralization allows users to determine its value and the approval of every transaction.

These approved transactions are then stored on a block and when the block is full it is included in a chain of other blocks. Studies indicate that there are more than 23 million users of blockchain wallets around the world. They also predict that the value of this industry will exceed $19 billion in the year 2024.

The Advantages of Blockchain in Mobile Application

More than $2 billion was invested to help correct some errors in blockchain in the year 2018. This implies that that this technology has a lot of advantages that we may not even be aware of.

One of the industries that has benefited from blockchain is the mobile industry and here are a few advantages of this technology in mobile application:

In conclusion, blockchain technology may still be at in development, however, the advantages it offers to mobile applications remain outstanding.